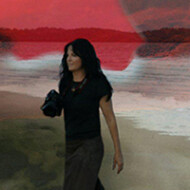 This user has not added any information to their profile yet.

Donna Maree Robinson is an award winning multimedia artist who is based in Queensland, Australia. She is primarily interested in site-specific projects and works across a variety of disciplines that include large scale video projections, public works, gallery exhibitions, filmmaking and festivals. Her work explores the poetic potential of an environment which she infuses with layers of meaning, imagination, memories and history; a visual intersection of the natural world and our human existence within it.

Donna has a Master of Contemporary Art from the University of Tasmania and was mentored by internationally renowned new media artist Craig Walsh in 2010. Her work has been shown in a number of national and international exhibitions, including New York, London, Sydney, Brisbane, Melbourne, throughout Queensland and Iceland where she attended a 2 month Nes Artist Residency during the winter of 2013.

In 2012 Donna won the QRA Digital Art Award and was a finalist in 2016 for both the London based Lumen Art Prize and the Contemporary Art Awards (Australia). In the past she has been shortlisted for international awards such as Screengrab and the Sunshine Coast Art Prize.

Donna has completed permanent public art works for the Mackay Base Hospital redevelopment and the Jezzine Barracks precinct in Townsville.