My Bed is a work by the English artist Tracey Emin. First created in 1998, it was exhibited at the Tate Gallery in 1999 as one of the shortlisted works for the Turner Prize. It consisted of her bed with bedroom objects in a disheveled state, and gained much media attention. Although it did not win the prize, its notoriety has persisted. It was sold at auction by Christie’s in July 2014 for £2,546,500.

The idea for My Bed was inspired by a sexual yet depressive phase in the artist’s life when she had remained in bed for four days without eating or drinking anything but alcohol. When she looked at the vile, repulsive mess that had accumulated in her room, she suddenly realized what she had created. Emin ardently defended My Bed against critics who treated it as a farce and claimed that anyone could exhibit an unmade bed. To these claims the artist retorted, “Well, they didn’t, did they? No one had ever done that before.” 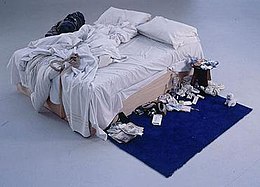