The Big Day Out (BDO) was an annual music festival that was held in five Australian cities: Sydney, Melbourne, Gold Coast, Adelaide and Perth, as well as Auckland, New Zealand. The festival was held during summer, typically in January of each year but was sometimes held as late as early February in some cities including Perth.

The event was conceptualized after the Violent Femmes announced a tour of Australia. Promoters Ken West and Vivian Lees sought another act as middle-level support for the band’s tour. They succeeded in securing Nirvana to play the Sydney leg at the Hordern Pavilion. The Big Day Out debuted on the 1992 Australia Day public holiday in Sydney and eventually expanded to Melbourne, Adelaide and Perth the following year. The Gold Coast and Auckland were added to the schedule in 1994. As of 2003, it featured seven or eight stages (depending on the venue), accommodating popular contemporary rock music, electronic music, mainstream international acts and local acts. Auckland was taken out of the tour schedule in 2013, but the festival returned to the city for its last run in 2014.

After the partnership between Ken West and Vivian Lees was dissolved in 2011, Lees sold his stake in the event to American festival promoters C3 Presents. In early June 2014, C3 attained full ownership of the Big Day Out festival and announced the cancellation of the 2015 event on 26 June 2014 with the option for the festival to return in the future left open. Despite this, the event has yet to return in subsequent years and as of 2022 there are currently no plans for any event to be held in future. Founder Ken West died in April 2022 aged 64. 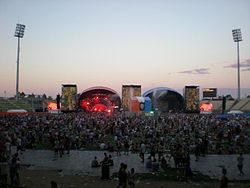